A faulty ECU is usually the cause of different issues in the smooth running of a vehicle. While a faulty ECU can cause the car ignition not to start, it can also reduce fuel economy. Hence, you want to know when your vehicle’s engine control unit is the issue and take it for repair.

The question is, how to test an ECU with a multimeter?

Though different issues can signify a faulty ECU, such issues can be linked to other causes. Hence, it is best to troubleshoot your ECU and establish if it is responsible for issues with your vehicle.

Interestingly, a multimeter is a simple tool for testing an ECU. With a multimeter, you can troubleshoot your ECU and know which of its components is bad.

What is an Engine Control Unit?

ECU stands for “Engine Control Unit.” ECU, also known as an engine control module, sees into the performance of a vehicle’s engine. An ECU collects data from multiple sensors in the engine, interprets the data, and uses it accordingly to enhance the engine’s performance.

Some activities in a vehicle’s engine depend on the functionality of the ECU, and when the ECU is bad, it tells on these activities.

Major activities controlled by ECUs include:

How Do ECUs Work?

As earlier stated, ECU controls different activities in a vehicle’s engine. For example, ECU manages the air-fuel mixture in a car engine. Since different variables are responsible for this particular activity, ECU is fitted to different sensors that collect and send signals to the unit.

The right fuel-air mixture for combustion in a car engine depends on factors like driving demand, engine temperature, air temperature, and fuel quality.

For driving demand, when the driver presses the accelerator, the throttle flap opens for airflow into the engine. Since this requires an appropriate amount of fuel, the Mass Air Flow (MAF) sensor measures the airflow and sends the data to the ECU, the ECU then injects an adequate amount of fuel.

The point here is that the ECU collects data from different sensors to regulate different systems in the engine.

How to Know If an ECU Is Bad?

A faulty ECU is not usually difficult to identify. With a few tale signs, you can know when your ECU is faulty. Here are a few symptoms of a damaged ECU:

What Is A Multimeter?

A multimeter is an electrical instrument used for measuring different electrical components, like voltage. A multimeter, also known as a volt-ohm millimeter (VOM) or a meter, is of analog and digital types.

While an analog multimeter displays reading through a moving pointer on a calibrated scale, a digital multimeter gives readings with multiple numeric displays.

The multimeter is the perfect tool for testing boards.

The preferred multimeter type for an application depends on the circumstances. However, a digital multimeter is more improved and cheaper than its analog counterpart. Also, a multimeter is a perfect tool for testing boards.

How to Test an ECU with A Multimeter

One of the simple methods of troubleshooting your ECU is using a multimeter. With the right guide, you can easily identify a faulty ECU with a multimeter.

Here are simple steps to follow when using your multimeter to test your ECU:

The first step in testing your ECU with a multimeter is to get the multimeter ready for the test. Start by setting the meter to the best available range.

Also, since the test will expose your meter to electrical damage, it is wise to provide a preventive measure. Introducing a current breaker is an effective means to safeguard your multimeter against electrical damage. Do this by using the circuit breaker with one of the meter’s lead.

It is often possible to identify issues with your ECU by a visual inspection. A visual inspection means checking your ECU’s components and ensuring they are all intact and connected. This lets you quickly identify faulty or disconnected components or circuits without using your multimeter.

In addition, ensure the ECU is connected to the necessary electrical components and receives power from the battery, as this might be the bane of the issue with your ECU.

If you can’t visually identify any issues with the components, go on to troubleshoot them with your meter.

Your ECU comprises different components and circuits. During a test, it is wise to start with the simplest components, such as the fuse and the relay. Since these components are more accessible to test than more complex circuits, you want to start the procedure from them.

After testing each component, conduct an amperage draw.

Continue your test by putting the meter positive lead to the battery’s ground post and momentarily touching the negative lead to the proper terminal of the module’s harness connector.

It is worth noting that the components under test must receive power from the battery to get a reading. Hence, ensure that each component under test is getting valid voltage from the battery. If you detect a negative voltage, it indicates there is a problem.

The reading from your multimeter gives an account of the component’s status. The reading for a functional component should range between 1 and 1.2 amps. Any reading exceeding this means the component or circuit under test is bad.

How do I test my ECU components? 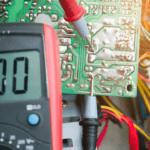 Identify which pins on the ECU connector correspond to the component. Set the multimeter to the ohms setting (resistance mode) and connect the leads. Check that the reading is within the expected range.

What is the most common failure of an ECM?

The most common failure of an ECM is the lack of synchronization between the different components. This can lead to several problems, including data inconsistency, process failures, and low performance.

How do I check my ECU voltage?

Set the multimeter to DC volts. Connect the black lead to the ground, and then touch the red lead to the wire that you want to test. If it is below 12 volts, the board may not work properly.

What happens if the ECU fails?

Does disconnecting the battery reset the ECU?

It depends on the specific make and model of the car. In some cases, disconnecting the battery may reset the board. The ECU is usually reset on older cars, while not on new ones.

This website uses cookies so that we can provide you with the best user experience possible. Cookie information is stored in your browser and performs functions such as recognising you when you return to our website and helping our team to understand which sections of the website you find most interesting and useful.